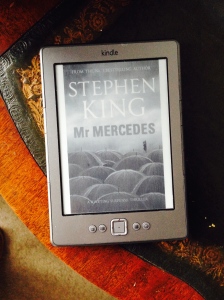 Let me explain. Most of the time, whether it’s a book, film or TV show, I see the flaws, the joins, bits that were added as an afterthought and ways that the piece could be improved. Noticing these errors fuels my belief that I too can write. But if a book is too good, as in the case of Mr Mercedes, then I’m thrown into an agony of self-doubt.

Before reading Mr Mercedes, I hadn’t opened a Stephen King book for some years. This was also because he’s a brilliant writer. I found his horror books so terrifying that if I was at home alone and it was dark outside, I’d have to stop reading, put the book down, go round the house whistling a merry tune, whilst checking that the windows and doors were securely locked against whatever ghoulies Stephen King had dreamt up to deliberately terrify me.

After I finished Mr Mercedes, and completed my therapy programme to tackle acute jealousy, I decided to read Stephen King’s book On Writing. It’s half memoir and half writing tips. Again, it’s beautifully written with both humour and humanity but I was less interested in the man – my tormentor – and more in the holy grail. How does he do it? What’s his process? 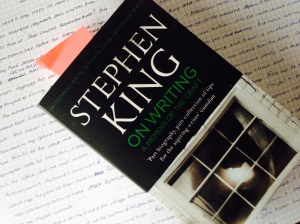 Stephen King’s starting point is situation and then he starts writing and lets the story unfold. So in the case of Mr Mercedes the situation is a retired cop who goes back to solve a major unsolved crime. On the face of it this situation is hardly the most original in the world. How many times have we seen a retired cop/spook/soldier/Starship Admiral (delete where applicable) called back to save the world from huge peril? But it’s how you tell ‘em and Stephen King tells ‘em so damn well.

In his book On Writing, there is only one writing exercise. He gives you a situation and tells you to write six pages. Desperate to learn the dark secrets I did the exercise.

I found it difficult. If you are the type of writer who plans – as I am – writing this way is a different experience. For me, it was slower. It was more agonising and more intense. There were moments of discovery and frustration. At the end I had to do a lot of rewriting. More than usual because I had no idea what I was writing about until I finished. But the feedback I’ve had on the piece has been good so I’m now in two minds as to whether I should give it another go.